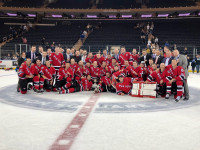 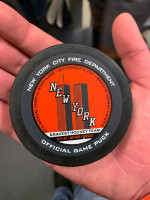 FDNY/NYPD Rivalry Takes to the Ice

Each year, the friendly rivalry between New York’s finest, FDNY, and New York’s bravest, NYPD, takes to the ice to shoot it out for bragging rights. And although both teams play in other tournaments throughout the year, this is the game that means the most. As Team Manager Derek Kern mentioned, “This is our Stanley Cup.”

Having missed playing the annual game in 2020 because of the pandemic, both teams were anxious to get back on the ice and face off. Their return also coincided with the 20th anniversary of 9/11, so both teams honored those that were lost on 9/11 and thereafter. While it is a charity game, both teams come to play and play hard. The two teams, along with fans, reunited at the famed Madison Square Garden in NYC where the event was broadcast live on national tv for the first time on ESPN2. These two powerhouses definitely kept the action going throughout the 3-hour game and threw in a few ice scuffles as well.

Coming into this year’s event, FDNY carries the most wins at 25 versus 18 wins for NYPD, and if you are keeping count, 3 games that ended in a tie. FDNY emerged victorious once again, squeaking by with a 5-4 win over NYPD, to keep a commanding lead in the game count and to take home bragging rights. While the players are out to play some serious hockey, they are still raising money for charity. The main recipients of monies raised from this event are the Ray Pfeifer Foundation on behalf of FDNY and the PBA Widows and Children’s Fund on behalf of NYPD.

The Ray Pfeifer Foundation, founded by FDNY firefighters, assists 9/11 first responders and their families with medical needs that end up not being covered by insurance. Ray Pfeifer himself was a NYC firefighter who became an advocate for those individuals who needed or will need treatment for a myriad of health problems resulting from exposures during the 9/11 tragedy. A dedicated firefighter, he worked at ground zero for 8 months, searching through the rubble left over from the building collapses. He himself was diagnosed with cancer in 2009 and passed away in May of 2017. Rob Serra, retired ff and former team member, who himself had to retire from the department because of 9/11 related illness, talks of the foundation they raise money for and what motivates the team “Every year we have different widows and children, that’s the saddest part. Somebody dies in the line of duty every year.”

HAIX had the honor and privilege to be a sponsor of the FDNY Hockey team for this event, and got an up close and personal view of the game itself. The game was able to be attended by HAIX’s Director of Administration, Kerstin Koehler, and HAIX’s Social Media Manager, Zach Czirr. “With this game being NYPD vs. FDNY, at Madison Square Garden, and so close to the 20th Anniversary of the 9/11 attacks,” Zach commented, “you could feel a tremendous amount of emotion & energy in the building. It was amazing just being there and an absolute honor.” And while the two teams go to battle out on the ice, in the end, they are really coming together as one to raise money for some good causes.