Cultures Connect Through Music at Interschutz 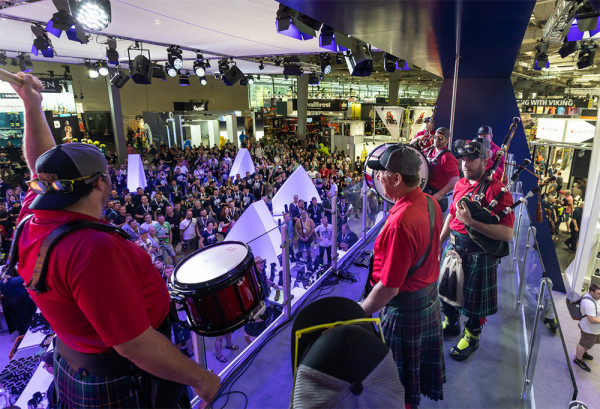 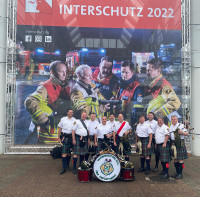 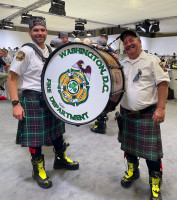 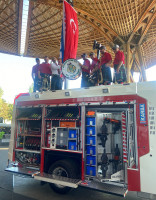 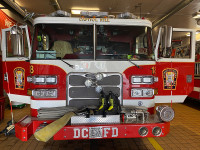 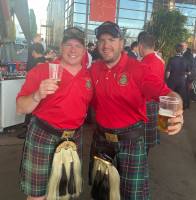 A unique sound filled Interschutz this year. The mournful call of bagpipes spread throughout the trade show, calling visitors to gather at the HAIX booth. Wide-eyed listeners were drawn in by a pipe and drum band made up of Americans playing an instrument that many at the German trade show had never heard before.

A Scottish-rooted tradition in America goes to Germany
Fire department pipes and drums bands are unique to the United States. The Great Potato Famine in Ireland in the 1840s forced many immigrants to escape to the U.S. This is where many Irish immigrants faced discrimination, the only jobs available to them were dangerous ones, such as firefighting and police officers.

The late Ewald Haimerl, the CEO of HAIX, heard an American firefighter pipes and drums band play and wanted to share the sound with everyone he could, especially with people in his home country. He would do this by bringing DC Pipes and Drums, one of the premier bag piping bands in the United States from Washington DC, to Interschutz in Hannover, Germany. Interschutz is the world’s largest trade show for the fire service industry.

Although Ewald passed away in 2019, DC Pipes and Drums and the HAIX team brought his dream to life years later.

A dream realized
On June 16, the members of DC Pipes and Drums flew to Germany. Although the journey  was long, it was highly anticipated after years of delays and difficulties.

The band members spent the first day adjusting to a new time zone. Excitement began to build on the second day. The men got to explore Hannover and Interschutz, then went to rehearsals and sound checks with HAIX.

After years of planning and practicing, Interschutz began, and the band was ready to take the stage. DC Pipes and Drums performed on the HAIX stage multiple times. Many people at Interschutz had never seen a Pipes and Drums band and were interested in the bagpiper’s unique sound, so the band was even invited to play at other booths and areas across the show floor. “We would play at the HAIX booth, and then we would book it across the park to another booth, and then we would pick it back to another place and so on, back and forth, like most of the day,” band member Dan Loughnane explained. “It was nice because we got to go see some other parts [of Interschutz], and we were very happy to play.”

The latest innovations
Interschutz features the newest creations and developments for the fire service industry, and the DC Pipes and Drums members got to see it all as they performed across the show floor.

For DC Pipes and Drums, the show was more than seeing the industry’s cutting-edge technology; they also saw the differences between the fire service industry in Europe compared to the United States. “The show was way bigger than I thought it would be, and we were just exposed to the market over there [in Europe] as far as like what we don’t have here [in North America],” said Dan. “We got to see innovations and where the fire service can go.”

Building relationships
After one of the band’s performances, a teary-eyed man approached the musicians. In broken English, the man from Turkey told the musicians he had never heard or even seen bagpipes before and was completely enamored by the instruments. “He told us he’d never heard anything like it,” Dan smiled. “He ended up running to almost every show that we played, he would show up and be at everything. Some people asked us why we were [in Germany], and it was to do that kind of thing – to share our culture and connect with the people [at the show.]” Love of music and passion for the industry connected the men, despite a language barrier and cultural differences.

International experience
Bag piping has connected Dan and his bandmates to people around the world.

“I like playing, it’s taken me a lot of places,” said Dan. “It’s taken us all around the United States, we’ve played internationally now at this point, which is cool. It’s given me a lot of experiences that I wouldn’t have had before.” He spoke of his time in Germany and at Interschutz with excitement but is still looking for more after this international performance experience. He said he’d love to come to Germany again someday and said the band is looking forward to possible future performances with HAIX.