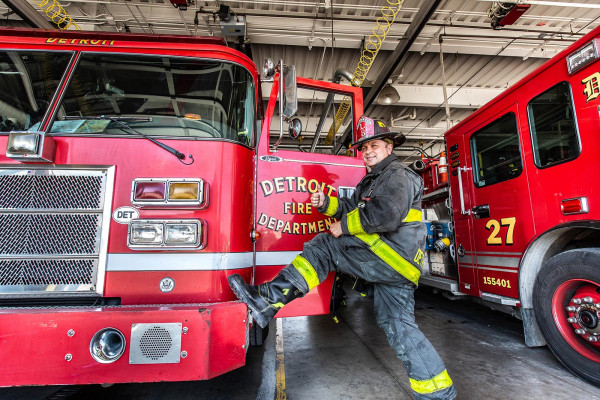 As of March 2017, there are a total of 38 fire stations in the city of Detroit, not including the Fire Headquarters. There are 26 Engine Companies, 14 Ladder Companies, 6 Tactical Mobile Squads, a Fireboat, and a Hazardous Material Response Unit as well as 24 Medic Ambulances and several specialized units. These fire stations and companies are organized into 8 battalions, each headed by one Battalion Chief per shift.

Detroit was once a boom town and home to the US automobile industry. But the city fell on hard times. Almost half of municipal employees lost their jobs, and both public services and the urban infrastructure supporting 700,000 inhabitants went into deep decline. In 2011, the city’s Emergency Medical Services (EMS) were demerged from the Fire Brigade and privatised in order to save money. 15 firefighting crews were axed in 2012 as the cost-cutting measures continued. In 2013, the City of Detroit became the first public authority in the USA to declare bankruptcy. The nadir had been reached. However, things are now looking up once more. The improvement is particularly apparent in the center of the city, and funding for rescue and emergency services is high on the list of government priorities. New vehicles and equipment are being purchased.

"The city went through a difficult time and so did Detroit Fire," says Mike Nevin, President of the Detroit Firefighter Association. Mike is, however, also delighted to report that a recovery is kicking in. At one time, whole fire stations were being shut down. Firefighters were forced to use poor equipment and vehicles that were scarcely up to the job. But these are now things of the past. Detroit is investing again. Money is being ploughed into human resources, the fire engine fleet and new kit. And the principal union representative of the city’s firefighters is not the only man who believes that HAIX firefighter boots are the number one option.

The President of the Detroit Fire Association has bright and inquiring eyes. "I'm Mike!" he says, as he stretches out a hand. "It's always a pleasure to meet people from HAIX®." On this particular day, we are able to catch a word with Michael V. Nevin as he moves from one important meeting to another.

He has 1,300 Detroit firefighters to take care of, and time is always tight. But mention of the name of HAIX® soon gets him talking. He tells us about the recent history of "Motown" and of the problems created for the firefighters by the declaration of insolvency in 2013. He also relates some of his own experiences as a fire brigade member. There are stories of critical deployments, such as a close call that once occurred when he trod on a torn power cable at the seat of one particular fire. He instinctively grabs his boots, which he holds up to show the visitors. He recalls his first pair of HAIX®, which he paid for out of his own pocket when working as a professional fireman 25 years ago. "Thank God, these boots saved my life," he states. There is nothing anyone needs to tell such an experienced firefighter about safety at work. There is no question that boots are a key piece of equipment when it comes to protection. "I wouldn’t put anything else on my feet than HAIX® Boots," he goes on. Mike Nevin also very much believes in keeping his colleagues safe. This makes him all the more delighted that the Detroit Fire Department will be fully equipped with HAIX® firefighter boots in future.