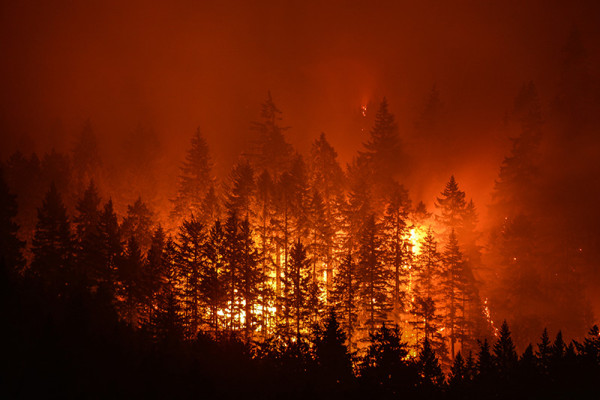 The wildfires in California have cost may people their homes and some even their lives over the past several years. One of those homes was the retirement community of former police officer and HAIX® Bootstore consultant Jim Gerien and his wife. Their son, Scott, describes the situation of his parents after the dramatic evacuation...

In the early morning hours, the power went out in their home, so my Mom woke up my Dad. Even before falling asleep, they had the smell of smoke in their noses and jokingly suspected that a neighbor was smoking. Looking outside, they saw police cars in their street, and one of the officers told my father that there was a fire on the top of the hill.

Dad wanted to know why they were not evacuating people and told the officer to get in his car and use the loudspeaker to tell people to leave the area. I can imagine these instructions from my father, a retired New York City detective, were probably quite direct. The police followed his request. So, there in the dark, Mom and Dad got dressed, collecting what they could grab; phones, chargers, computers, and some jewelry and left their home.

Just as they were about to leave, my mother remembered that her neighbor, an 80-year-old widower who was recovering from the injuries of a fall, probably did not know what was going on. So, they woke him up. Because of his injury, he was only very slowly on his feet. My dad helped him down the stairs and helped him into the car. My parents got into my father's business car, leaving their personal car behind, because the gate would not open due to the electric being out. Days later, when my parents returned, the car was nothing more than a pile of melted metal.

The street was already in flames at both ends. Only one escape route still led out. My mother described a stream of embers coming down the street as they drove off. The main road through the residential area was already blocked by cars, which people had abandoned as they fled from the flames. My father, ever the police detective, found a way out on a side street, and all three escaped safely.

My parents did it because they are survivors. They were lucky, for which I am grateful. But they are also neighbors who risk their own lives to support someone who needed help.