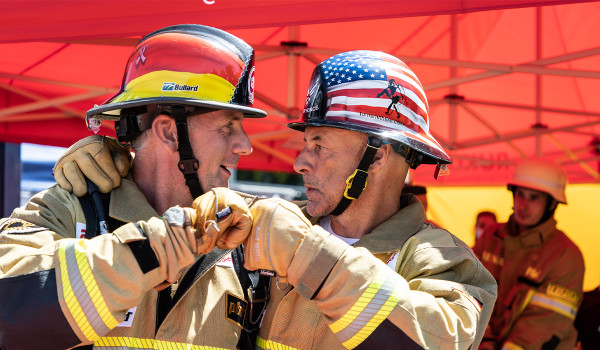 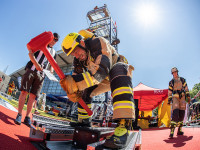 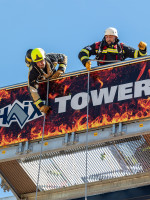 Temperatures over 95 degrees, firefighting equipment weighing around 90 pounds and a hose package that weighs a whopping 42 pounds. So much for the key stats of the FireFit European Championship, which was held during Interschutz Community Days 2021 in Hanover, Germany. The only way to cool down on these hotter than hot days: water from the fire hose. And that was certainly made use of every single day. Whether tandem, relay, or individual run - the men and women firefighters demonstrated just what this firefighting competition is all about at the Hanover exhibition center.

Three high-pitched beeps. That is the start signal before every run. 60 steps on the HAIX Tower, packed with 42 pounds of hose and in full breathing apparatus. At a height of 40 feet, it says: “Pull, pull, pull!” Competitors must hoist more hose using a rope dangling from the tower, pulling as fast as possible, the hose shoots upwards. And already your legs are tripping down the stairs once again. “Fast feet!” Is the motto. The next stations are already waiting: impact machine, slalom, extinguishing fire. Then the boss, Dummy Randy, weighing in at nearly 200 pounds. With him in tow, dragging and not carrying, competitors must travel 100 feet backwards over the red and yellow course. In the end, a bang on the target mat - done!

The course has it all, just like the athletes. The fastest man this weekend is Tomasz Grzelak from Team Warsaw with a time of 01: 23.81. The fastest among women is HAIX athlete Meghann Krüger. At 02:20:36 she reached her personal best. Together with HAIX athlete Pascal Dülge, she won another European title with a time of 01: 44.74 in the tandem mixed. Meghann's formula for success? Deadlifts, squats and lots of head training. It is also important to increase exponentially in training. Like Pascal, Meghann relies on preparation for interval runs. "First in athletic wear, then in uniform, then with a breathing apparatus on the back," said the firefighter.

Finally fighting with each other again

From Poland to the Czech Republic to France - over 400 firefighters came together in Hanover. It's like a big family reunion that everyone has been waiting longingly for. There is even an Iranian team at the start and Sean Sullivan, from Frankfort, Kentucky, also made the long journey. “I wanted to take the chance to compete against the best firefighters in Europe. Not many of them come to the American competitions, so the challenge here particularly appealed to me,” says Sullivan. The 47-year-old rewarded his ambition with a time of 01: 29.46 and thus first place in his age group.

"Especially because of the Coronavirus outbreak, I had no expectations," says HAIX athlete Pascal. In his final run, he competes against Adam Spychała, one of the heavy favorites. Nor did he expect his run to be one of the most exciting of the entire competition. "At the top of the tower, I was one step ahead of Adam on the rope - that really spooked me!" And Pascal really pushed the limit on the track again. “It was only when I crossed the finish line with the dummy that I saw that Adam fell much too early.” The sportsman feels for his opponent and regrets his outcome: “The pressure was probably enormous for him at that point."

Less than a week after the European Championships, many of the athletes went to the next FireFit competition in Toruń, Poland. At least five more dates are still pending this year, including in Dortmund, Saxony-Anhalt, South Tyrol and Croatia. Next year, with the Corona virus under control, look for more competition to take place all over the world, including Canada and the United States. Regardless of whether you're crazy about the fire service or just a fan of tense competitions - if you weren't there in Hanover, you should definitely take advantage of one of the next opportunities.