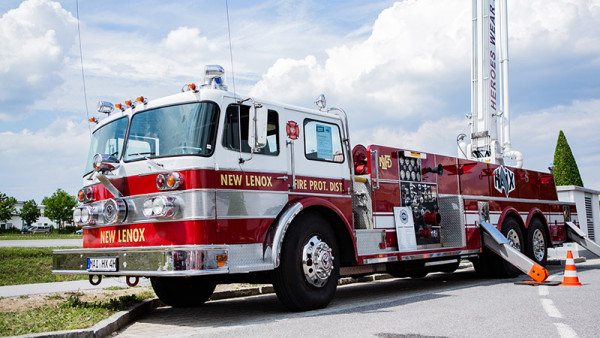 No matter where it is, the old “snorkel” style fire engine is always a big attraction. The U.S. truck drove numerous missions for the New Lenox Fire Protection District, southwest of Chicago, for 45 years. In 2016, former HAIX® CEO, Ewald Haimerl, purchased the New Lenox Snorkel and it had quite the journey from the U.S. to Germany. First, the New Lenox Snorkel traveled 1200 miles from Illinois to the Port of Charleston, South Carolina. Due to its size and low gas mileage, the 31-gallon engine had to make multiple stops for fuel during the trip through the Appalachian Mountains. There were also several police checks along the way and not just because it was traveling slower than normal traffic, but also because of the sheer magnitude of the truck. Once it reached Charleston, the truck was transported by ship across the Atlantic to Bremerhaven, Germany where it was stuck in customs for a week before it made the 7-hour trek to its final home at the HAIX® Headquarters in Mainburg. Extensive restoration work was done on the vehicle to make it fully functional today.

The most eye-catching model in his collection is the GMC Pump Truck, built in1942, and originally commissioned on a U.S. airbase in Sweden. The vehicle is the oldest in the HAIX® Oldtimer Fleet. The pump truck was in use on a U.S. Air Base in the north of Sweden for over 30 years. After a long break at a used car dealer, HAIX® breathed new life into this convertible truck. With the top open, it is the star of photo shoots at trade shows and other HAIX® events.

The Ford TK, which was built in 1949, has been part of the HAIX Oldtimer Fleet since the end of 2018. Before that, it was used as a promotional vehicle for an insurance company in Georgia. However, most of the passengers are carried by the Opel Blitz, built in 1965. There is space for eleven people in the small light fire engine LLF, including the driver.

In addition to the four fire engines, the HAIX old-timer fleet also includes two Police vehicles which are considered “Young Timers” due to when they were manufactured. These include a Chevrolet Impala 300 SS Police Car from 1995 and a 1993 Harley Davidson Police Motorcycle, which also had an impressive journey to Germany.

Officers from the Los Angeles Police Department (LAPD) originally took possession of the Chevrolet vehicle and initially used it as a backup patrol car before it was taken out of service. It was then chauffeured to the Swiss honorary consul in Zurich. Later, it came to the U.S. consulate in Munich under private ownership until it finally found its way to HAIX® in Mainburg. The comfort of the old vehicle and the special sirens are always a big hit at area events.

HAIX® continues to preserve the history of classic and vintage Fire Trucks and Police Cars and hopes to add to this fleet in the future!