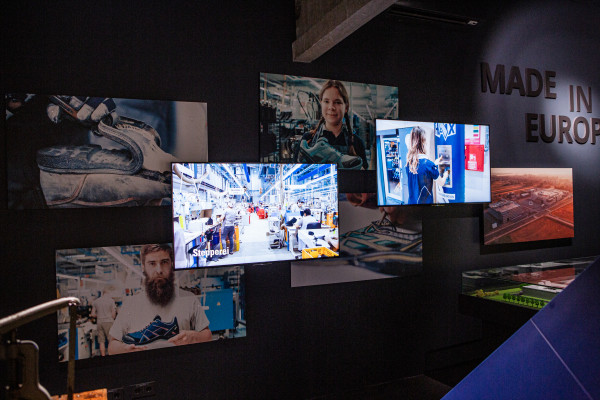 Did you know that HAIX® has its own retail stores in Germany? In fact, there are now three shops throughout the country that are solely dedicated to selling HAIX® footwear, clothing and accessories. Last month, our newest and biggest store yet opened its doors to customers for the first time! The More than 8,000 HAIX Bootstore fans from around Germany and Europe came out to the new location in Mainburg to check out the large-scale festivities!

The new facility extends over an area of more than 10,000 square feet and encompasses a huge retail store, high-tech production processes along with interactive displays of the latest developments in footwear, from the machines and tools used to create the very first HAIX® boots, to a display of the evolution of our structural firefighting boots. There are also tours around the manufacturing facility and logistics center to give visitors an up-close and personal look into how our boots are made, exclusively in Europe! Another highlight of the new HAIX® World is the GORE-TEX® water wall, where visitors got the chance to test out the weather resistance of their shoes and clothing inside the “Climate Cube.”

The company marked the opening with numerous attractions and a spectacularly orchestrated key handover.A helicopter landed right in the middle of the event and out stepped Ewald Haimerl, Managing Director of HAIX®. Accompanied by bodyguards in full SWAT Team uniforms, he crossed the road and headed for the stage. In his hand, he carried a black bag, containing the key for the new HAIX® World to officially open its doors. Once the key was handed over, the activities really got started! Outside, a stuntman who once doubled for Brad Pitt in the movie “Inglorious Basterds”, was on hand with his team to stage a number of spectacular stunts, including setting themselves on fire! Onlookers held their breath as performers leaped from heights of more than 50 feet with lit torches. Then, fans and employees got in on the action by doing their own fire jumps!  A firm which specializes in fall protection and rescues offered demonstrations, giving fans the chance to run through a themed obstacle course and scale a rock-climbing wall. Attendees also had the chance to win sightseeing helicopter flights throughout the day. Various vintage fire brigade and police vehicles were on display and proved to be a big hit! The U.S. “Snorkel” fire engine, which boasts an impressive 75-fiit turntable ladder, was a popular setting for photo ops.

A Volunteer Fire Brigade Association supported the event by organizing a raffle. All of the proceeds, totaling more than $28,000, were donated to charity.