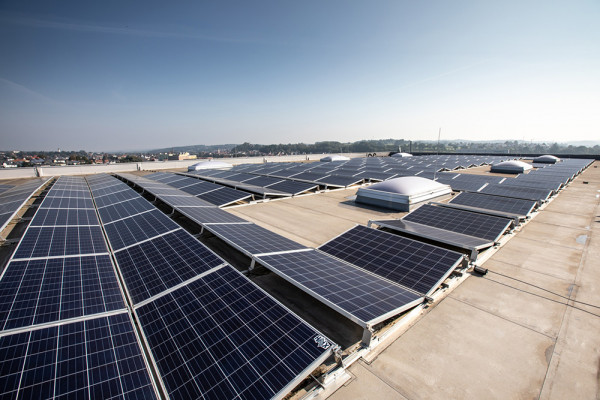 Using the Sun to Generate Electricity and Heat

Energy sustainability is an issue which HAIX has been quietly pursuing in the background for many years. The company’s engagement in this area is manifested by using efficient construction methods, carbon-neutral heating and clean energy production. Electricity is taken from the sun, and wood is used to provide warmth. Insulation is integrated into the facades of the company’s buildings, while HAIX has also been using electric vehicle technology to cover all shorter distances since as far back as 2017.

e-mobility
Every year, the Logistics Center ships around 1.5 million pairs of boots and shoes to destinations all over the world. All the vehicles which operate between its stacker racks and loading ramps are electrically powered. “Even our high-reach forklift, which can stretch up to 12 meters, is entirely electrical,” states Axel Krüger, Head of the HAIX Logistics Center. “The same goes for our stock-picking and low-lift trucks.” e-scooters with trailers are deployed to speed up small-scale transport tasks. Throughout the day, all vehicles spend brief periods hooked up to the charging stations in order to top up on solar energy.

Short trips by car went fully electric at HAIX as long as five years ago, and almost one in five fleet vehicles now use the company’s own 11-KW wall boxes to recharge their batteries. This has allowed HAIX to decrease average carbon emissions to less than 125 mg/km.

Drawing energy from the sun
Much of the retrofitting has gone unnoticed. It may not, for example, be immediately apparent to those working in the offices that a significant amount of power is being generated from solar panels on the roofs of the HAIX buildings. Three photovoltaic plants are producing solar energy at HAIX’s main site in Mainburg, and these will soon be joined by a fourth. The first such system was installed on the main administrative building in 2010. A second was later erected on the building which used to be the Finished Goods Warehouse and is now home to the HAIX WORLD. Total output in these two cases is 100 KWp.

The third system is to be found on the roof of the Logistics Center, which contributes a further 100 KWp. Over the past few years, the company has consumed almost 65 percent of the electricity produced in this way. The rest is fed into the grid. e-mobility is making great strides and is one of the reasons why so much green energy is needed with further demands in the future. With this in mind, a new solar plant also capable of supplying 100 KWh will be commissioned in the late summer of 2022. The plan is for a 60-KWh battery to act as an intermediate buffer and help increase the proportion of energy the company uses itself.

Croatia
The planning phase for HAIX’s production location in Croatia began back in the 2000s. From the very outset, the facilities were designed to run on a combination of process heat with pumps for winter heating and summer cooling. Installation of a photovoltaic plant featuring the latest generation of solar panels is about to be given the final planning go-ahead. The intention is for the installation of 1,400 panels covering a module area of 3,100 m2 to provide up to 630 KWp of electricity. By both Bavarian and Croatian standards, this represents an impressive achievement with regard to the careful use of resources and the manufacture of high-quality products which are sustainable.

At HAIX, Made in Europe does not simply mean that everything is entirely produced there. This is a motto which also reflects the company’s total commitment to sustainability and climate protection.