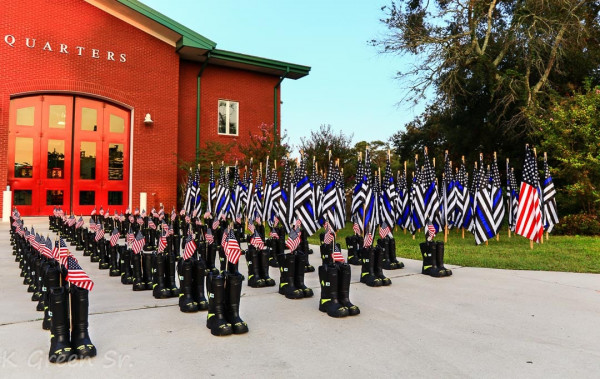 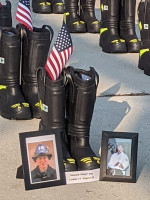 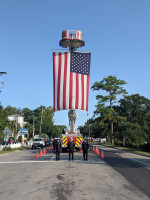 This past September 11th HAIX got the honor to participate in Southport Fire Department’s remembrance ceremony that honored the 343 firefighters that were lost on 9/11, twenty years before. The sacrifices of the first responders were commemorated by an impactful display and ceremony. 343 pairs of HAIX boots were on display in orderly lines in front of the firehouse, each with its own small U.S. flag. The department also honored the memory of the 23 officers with NYPD and 37 officers of the Port Authority PD that were lost that day. Sixty Thin Blue Line flags were placed in the grassy area between the Fire Department and the Police Department. The eight Emergency Medical Technicians that were lost were also represented with eight Stars of Life on display.

SFD Chief Charles Drew opened the ceremony, saying “Today, the are 343 empty boots here representing the lives of those heroic men and women. As we look at these empty boots, let us never forget our hearts are not empty, but we carry their memory, their service, their commitment, their bravery and dedication with us each time the alarm sounds.” Police Chief Todd Coring also provided a moving tribute to the 60 law enforcement professionals who also lost their lives that day.

Another event that takes place this week in communities across the United States will be Light the Night for Fallen Firefighters. Anytime between September 26th and October 3rd, landmarks, fire departments, businesses, and homes can honor the sacrifices of fallen fire heroes by lighting up red.  Any type of red lighting can show your support, whether it be red spotlights the building or changing outside bulbs from white to red. Those that participate are encouraged to post photos on social media using the hashtags #nffflightthenight2021 and/or #firehero2021.

The weekend will culminate with a final event on Sunday with the Bells Across America for Fallen Fighters at noon. Fire Departments and their places of worship will pause and ring bells to honor the fallen. Bells have a great deal of significance to firefighters. Bells were used to call firefighters to the station, it would mean the beginning of a shift, would notify other departments when help was needed and also would designate when a unit was done with a call and was back at the station. If a firefighter dies, a department would sound a series of bells to alert everyone. You will also see the ringing of bells at a firefighter’s funeral or memorial service.

If you would like to organize a future event in your community to honor the fallen, you can contact the National Fallen Firefighter Foundation for more information.