Julie Dudley: Always Up For A Challenge 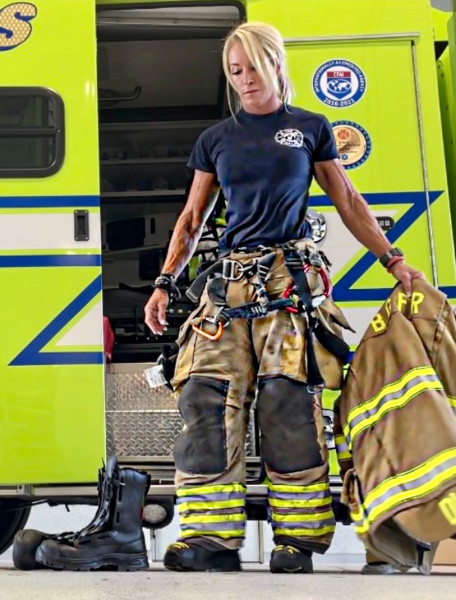 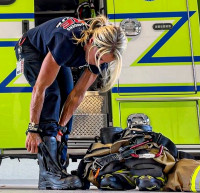 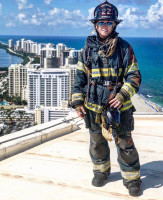 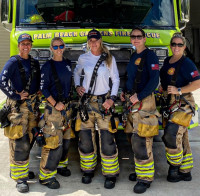 Florida Firefighter, Julie Dudley, is living proof that you are only as old as you feel. Hailing from Jupiter, Florida, Julie is a 21-year veteran career firefighter with Palm Beach Gardens Fire Rescue. You would never guess it, but this elite athlete is the mother of two grown children and a grandmother as well. Graduating from the fire academy in 1997, Julie put herself through EMT, Paramedic, and the academy while a single mother raising her children. She was able to start her career while still in medic school and can proudly say she has been with the same department for her entire career.

Julie has always been very active, and considered herself a bit of a “tomboy”. Initially Julie had dreams of being a chiropractor, but plans changed when she became a mother at a young age. The fire service appealed to her both because it was a physically demanding profession, but also because it had a medical component as well. After having her second child, Julie wanted a reliable job that would provide for herself and her children, while at the same time give her time to spend with her children. Her own brother was a firefighter. She saw how much he enjoyed his job and was intrigued by the stories he told, so she asked him one day if he thought she could be a firefighter. He said, “heck ya”, and the rest is history. Julie has always loved a challenge.

Julie works 24 hours on and 48 hours off. On shift days, a typical day involves checking out vehicles and equipment, running fire or EMS calls, completing any assigned training, physical fitness training, studying, and anything needing to be done. Her hobbies include CrossFit, paddle boarding, shooting, cooking or anything active and outdoors.  On her off days, she normally paddleboards, spends time with her kids, works out, or goes to the range for shooting practice. She considers herself pretty low key and a bit of a homebody.

An accomplished athlete and firefighter, Julie considers her greatest accomplishment to be her two grown children. According to Julie, “They are both kind, intelligent, beautiful, good souls.” A fun accomplishment of Julie’s was being selected as a competitor on first season of the television show “The Titan Games” hosted by Dwayne “The Rock” Johnson. She was the second oldest competitor to date. They called her the “firefighting Grandma”. Though she was beaten out in the second round, she would do it again just to show you don’t need to be a certain age to be fit. Age should never be a barrier to fitness. Julie proves you only get better with age.

Julie has some advice for other women that may want to be a firefighter. To quote Julie, “If it’s your passion, then do it! It’s extremely rewarding and challenging and the best job ever, but it is difficult and can be heartbreaking. But I believe we all have a purpose, and if this is it, then don’t let anyone stop you from doing it. Get all the training and classes you can, never stop learning, never become complacent, be the hardest worker in the room, be the firefighter you want showing up at your door.”

Where does Julie see herself in five years? “Retired!! And hopefully traveling the world!”