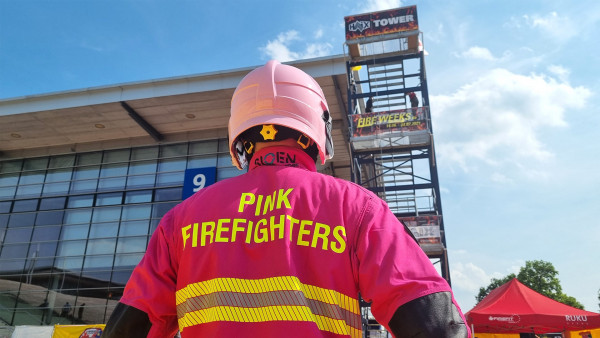 Vendelin wears pink and talks about breasts. Did that attract your attention? That is exactly his goal. The pink firefighter speaks openly about breast cancer, wants to educate people, and work on prevention. Having started as a lone fighter, it was not long before he was no longer alone on his mission.

Pants, jacket, helmet - everything shines in bright pink. This guy stands out between the abundance of beige, black and red turnout gear. His name: Vendelin Cliques, 41 years old, fire firefighter from Versailles. Seven and a half hours are behind him to take part in this year's European championship in firefighting as a pink firefighter. “But I'm not aiming for podium or gold medals. I came to Hanover to attract attention."

Vendelin has been training for two years to meet the demands of the FireFit course. That means first conquering the twelve-meter-high tower in full firefighting gear with a 45-pound hose package, then mastering the obstacle course including a “rescue” with a 200-pound dummy. A merciless fight in which each participant quickly reaches his or her own limits. The best in this sport generally complete the course in under a minute and a half. Vendelin doesn't count himself among the top athletes, but he tries to do his best every time. “That's where I see a lot of parallels with the fight against cancer,” he explains. “The conditions are tough, but you can't give up. It doesn't matter how long it takes you. Keep going until you have reached your goal! "

The illness that can affect anyone

“A friend had both breasts removed at the age of 30,” says the 41-year-old. A decision that touched him very much: to have part of the body removed in order to survive. "Her courage inspired me, as I was training hard for FireFit at the time." So why not compete in pink? He not only sees the contrast that he creates in the color, Vendelin wants to raise awareness of this illness among his male colleagues. Statistically speaking, breast cancer affects every eighth woman. “We all have a mother, sister or daughter. We all want them to live. That is why it is important that we take care of their health. "

A year and a half ago, Vendelin slipped into his pink gear for the first time. Little by little, his colleagues found out about it and smiled at it at first. "But when I told them about the statistics, many opened up." The majority of his colleagues are affected by deaths among friends or family. “That's why we have to talk about it. About the fact that self-care and early detection increase the chances of recovery," says Vendelin, "and not just in October which is breast cancer month, but all year round! "

Fight the fight together

It was already clear to the firefighter at the competition site in Hanover: My team should grow! The plan: a French, a British and a German team with ten colleagues each. Four months later, Pete Wakefield and Martin Schulz set up the international groups with him. Finding more team members should be easy for the three of them: “All we do is wear our pink suits and talk about breast cancer. It is unbelievable how much we can inspire people through this,” says Vendelin.

The British firefighter, Pete Wakefield, was no different. He invited the Pink Firefighter as a guest on his podcast. During the interview, Pete becomes a Pink Firefighter himself with the words "I want to be part of your team". Both meet again at the British Firefighter Challenge in October of this year. And although the individual runs are about running against each other, they run together. Pete, who is actually much faster, keeps Vendelin's pace and doesn't stop motivating him. “He's like a coach who exudes an incredible amount of positive energy. I'm glad to have him on board.” It doesn't matter how long it took them to run, the support of his fellow campaigners is much more important for Vendelin. “It is important that we, as men, raise our voices. But it is also important that we have women on the team. And that's exactly what we're currently trying to find,” says Vendelin, explaining his further plans. "We are not looking for the strongest runners, but the people with the strongest hearts."

Vendelin is now receiving inquiries from all over the world. He too wants to reach as many people as possible with his message. “I would like to fly to the USA next year and take part in a Stair Climb Challenge.” His colleague, Pete, even has high goals for this year: He wants to break the world record in the truck pull. As a Pink Firefighter, of course.

On U.S. shores a man with a mission

The United States has its own version of a pink firefighter, in the form of Marshall Moneymaker, a now retired firefighter from Montgomery County Maryland. Back when he was an active firefighter, Marhsall got the devasting news that his three sisters were each diagnosed with breast cancer. Marshall ended up losing all three of them within two years.  “I had a choice when my sisters died - I could sit on the couch and be miserable, or I could get up and make a difference. The memory of my sisters motivates me, as do the thousands of ‘new sisters’ I've met along the way.” Marshall says. And a new mission evolved.

His fellow firefighters were so proud of his efforts, they presented him with a full set of pink turn out gear and after that, he started to become known as the Pink Fireman. Shortly thereafter, Marshall started a breast cancer charity honoring his sisters called For 3 Sisters. They are dedicated to “raising awareness and improving the lives of people affected by breast cancer.” For 3 sisters provides financial support, resource case management services, and gets out and educates the community about breast cancer and the importance of early detection. Marshall attends events and makes appearances as the Pink Fireman, and people are always very supportive and enjoy the interaction.

On the road for a cause

For 3 Sisters just unveiled VICKY, an iconic one-of-a-kind pink fire engine that's wrapped in a stunning palette of eye-catching pinks, and the head turning message "You Will Never Fight Breast Cancer Alone!". Marshall stresses, “My goal is to take her across the United States to show every person fighting breast cancer that they're not alone, to remind every person that mammograms and self-breast exams are important, and to raise more money so that we can help more breast cancer patients across the US.” You just might see the Pink Fireman in an area near you! VICKY would be very hard to miss!