Putting Fitness to the Test 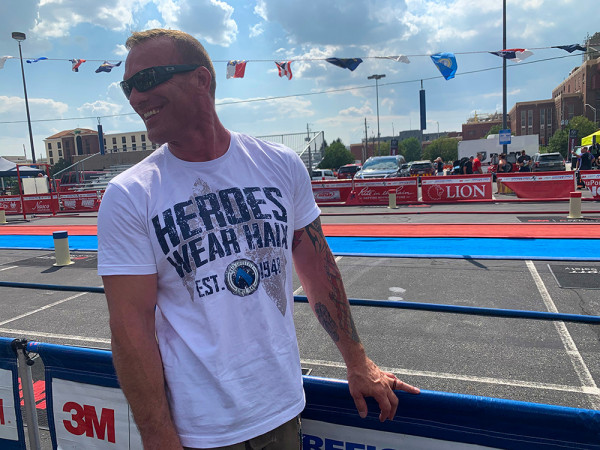 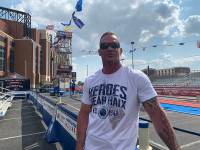 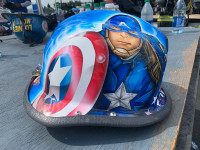 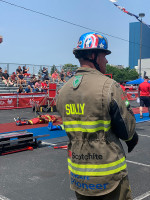 Sean Sullivan is a retired Captain with Frankfort Fire & EMS in Frankfort, KY Department and currently is a Master Sergeant Assistant Chief 445th air Force Reserves out of Ohio. He has been a firefighter for 26 years and started in the Combat Challenge back in 2007. A buddy in the department talked him into doing it and they thought it would be fun. Turned out it was a double-edged sword. It turned out to be a lot of fun but, he said, “it was also the worst thing I had ever done. It was really humbling that first time.” The time on his first race was a 2:44, and his second and third races where even slower, where he finished closer to 3 minutes for each race. Sean says he now runs closer to 1:31 – 1:33. Fourteen years of hard work and training later.

To train, Sean works out about 6 times a week. He does a mixture of HIIT training along with some personalized training sessions created by a coach. He also tries to go to a training course with a tower in Louisville about once a week. He tries to train with a group, usually Lexington firefighters, he feels he trains much better with a partner or a group because they will push you more.  “There’s a little ego that goes into everything,” says Sean, “Firefighters are already an Alpha mentality, why not feed it.” He does try and make his training schedule work with his family schedule. Family comes first.

Sean has competed in many Challenges over the years, from local competition in Lexington, Louisville, and Cincinnati as well as multiple places in Florida and even as far as Seattle, Canada, and most recently in Hannover, Germany.   It is not unusual for him to travel as much as 14,000 miles a year to different competitions. He has competed in almost 85 individual races in his competitive career.

His goals are always changing as he has been fortunate enough to attain most of the goals he has personally set for himself. This year, his goal is to defend and win the national title he won at the last national competition in 2019, he also wants to win the individual over 45 world championship this year, and would still like to break the 1:30 mark running the course.

He doesn’t have any long-term plan for his competitive racing, he has more long-term goals with his wife and kids. For him, this is all done for fun, and is grateful that he has the support of his wife and kids. Without their support, it would not make any sense to do it at all. His wife has traveled to many competitions and was able to travel with Sean to Hannover to watch him compete. Sometimes, if it’s summer or a weekend event, his kids will even travel with him to help cheer him on!

One of his most memorable experiences of his competitive career was getting to compete this year at the FireFit Challenge in Germany. It was his first time competing outside of North America, and he was proud to be able to hold the American flag on the winner’s platform during the medals ceremony.  Sean said, “I am not an Olympian by any stretch, but I was in a foreign country and I was the only one there with the stars and stripes. I was able to stand on that podium with it” For him, that was the most memorable experience yet.

Sean’s first bit of advice for anyone interested in getting involved in firefighting competitions would be to watch YouTube videos. To see just what the competitions are like and what it takes to compete.  He says, “Your first race is going to be terrible; I don’t care what your expectations are, it’s probably going to be worse than you think.” The best thing someone can do is to record their first run and watch it over and over to see where there were mistakes. Also make note of the time on that run and figure out what goal time to strive for. Watch videos of competitors that are performing at that time and see what they do differently. Most realistic is to strive for about a 15-20 second faster time. Smaller goals will set someone up for success in the long run. “The more you train for this, the more physically fit you’re going to be on the job,” stressed Sean., “There’s no way around it, you’ll be able to do more on the job after training for this than just doing your own thing your own way.”