Tackling the Annapurna Circuit in the Himalayas with HAIX 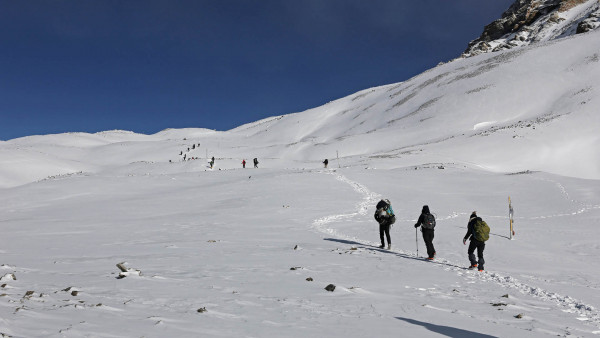 Earlier this year, adventure enthusiast, Andreas Leicht, completed a two week trek across the Himalayas to hike one of the world’s most famous, classic long-distance trails. Below he shares his story...

At the end of March, I had come to the spontaneous decision to hike my way around the famous Annapurna Circuit in Nepal. A two-week trip through the Annapurna Massif, which trailed through every one of the climate zones of the Himalayas. The journey began in tropical heat at an altitude of more than 2,000 feet above sea level, then climbed steadily until arriving at the icy heights of the Thorong La Pass.

Because I had so little time to prepare, the only possibility I considered was a guided tour with overnight stays in guest houses. I opted to travel with a local Nepalese guide from Kathmandu. I met with a group, and we set out on a bus and drove eastwards to Ngadi Lamjung.

Our small group comprised five tourists, Rajendra Karki the guide, and two porters to carry our luggage between them. This baggage mainly consisted of the equipment we would need for the extreme temperatures. We had a sleeping bag, a warm quilted down jacket, winter trousers, thermal underwear and gloves to help deal with the -15̊. In our own sacks, we carried two quarts of water, rainproof clothing and camera equipment. It was particularly important to have reliable and comfortable all-purpose hiking boots to withstand all possible weather conditions and temperatures, so I decided to go with my HAIX mountain hiking boots. They had never let me down in the past. The first night was spent at a guest house, right next to the raging Marshyangdi River which flows into the Ganges.

On the first day of the hike, we crossed terraced rice and banana fields while the sun beat down from above. After completing a strenuous climb, we were happy to relax on the airy and shaded verandas of the guest houses while enjoying ginger or chai tea and something tasty to eat.

Our equipment was put to the test on the second day, as the weather rebelled far earlier than I expected. Following heavy thunderstorms during the night, there was only a brief pause in the morning before the rain came hammering down again. We stood under a shelter to pack up and change into rain covers and waterproof jackets and trousers. At least we had not carried these for nothing!

The rain became ever heavier as the day went on. Pathways turned into rivers, and newly created waterfalls crashed down the slopes. The cheerful mood had deteriorated significantly, but I was glad to see that my trekking boots were keeping my feet dry despite the elements.

We finally reached our destination as evening approached and our guide expressed concern for the first time. He pointed out that the Thorong La Pass would not be accessible if the rain we had experienced turned into snow higher up. If snow blocked the pass, the only choice would be to turn around and follow the same route back, something none of us wanted after the storms we'd already pushed through.

The next morning, the surrounding mountain peaks were indeed white with fresh snow, but the sky was blue. Warmth spread as soon as the sun rose. After hiking a few miles, we saw the Manaslu loom up on our right-hand side. Its peak was windswept and crowned with a long trail of snow. It is the eighth highest mountain in the world, at 26,781 feet.

After lunch, the Manaslu was replaced by the first major peak of the Annapurna Massif: Annapurna II. This lay directly ahead of us, and was fascinating to look at. Through the crystal-clear air, we were able to enjoy gorgeous and sweeping views of its peak - a happy reward for the rainy conditions we had endured on the previous day, especially in a region in where spring cannot be taken for granted. Our admiration of this magnificent spectacle of nature was interrupted by a loud rumbling sound.

About 100 feet in front of us, a huge rock crashed down the steep slope, directly onto our path. The members of a group that had started walking ahead were just able to get out of the way in time. Only by sheer luck did we escape with no injuries. We quickly and carefully made our way past the danger spot. Such a close escape really hit home just how suddenly a deadly situation can arise in these mountains.

We had now been hiking through the Annapurna Massif for several days. We had more or less become acclimated to the altitude, and our joint endeavors created a sense of camaraderie within our small group. We began crossing a snowfield about 650 feet long in order to reach Pisang and the Buddhist monastery in Upper Pisang, our destination for the day.

Walls of snow and ice towered above the road to the left and right, over 12-feet tall. In the next village, we learned that this was the residue of an avalanche which had occurred two weeks earlier. They said an inexperienced Nepalese guide and a European tourist had been killed. They had ignored all the warnings of the locals and had set out despite the driving snow. A fatal error!

We spent two perfect and sunny days trekking through sparse pine forests on our way to Manang, a larger village of about 1,500 inhabitants which offered breathtaking views of the peaks of the Annapurna Massif. Manang is located at an altitude of 11,482 feet and is the last village accessible by off-road vehicles. From here, the only option forward was on foot or horseback.

We used our two nights in Manang to acclimatize further to the altitude - the cold, and the drop in air pressure. This was also our last opportunity to buy any additional equipment. Rajendra recommended that we should get some light crampons, metal traction devices, to fit to our boots for trekking, because more and more reports of large amounts of snow and ice at the Thorong La Pass were coming in.

From this point on, he also started to measure the oxygen saturation levels of our blood in order to be able to identify any signs of altitude sickness at an early stage. Also called mountain sickness, it happens when the body doesn't have enough time to adapt to higher elevations and lower oxygen levels - people can become dizzy and breathless, and advanced sickness can create nausea and disorientation, inability to walk, and fluid that builds up in the lungs. We met a number of travelers who were on their way back, forced to abandon crossing the pass after they began to display symptoms.

The good weather remained with us. Shortly after leaving Manang, I heard a deep roar that I had never experienced before. Ice masses right at the top of the slope on the opposite side of the valley had shifted loose and began an avalanche.

We took in this dramatic spectacle from what we assumed was a safe distance. Within a minute, a powdery cloud of ice crystals had formed and spread through the valley. Even from miles away, it almost reached our group.

A few hours later in the afternoon, after having enjoyed an extensive tea break on a roof terrace, we arrived at the tiny settlement of Yak Kharka. This was to be our final break before crossing the pass. Large groups of blue sheep and the occasional yak were grazing on the slopes. Unfortunately, we once again discovered a large number of dead yaks. The landlord of our accommodation now told us what happened.

According to them, a great deal of fresh snow had fallen at the start of March, piling over the course of only a few hours up to 10-13 feet. Despite their ability to adapt to altitude and cold, yaks are only 5 to 6 feet tall. They were engulfed by the snow and had become completely buried, perishing where they stood. Even transmission towers and power cables had been fully covered that day. A few weeks of warm sunlight melted this huge amount of snow, and revealed their bodies.

The most difficult part of our tour, the crossing of the path, was drawing near.

We anticipated problems. This year, the snow and the poor weather conditions had meant that virtually no groups had succeeded in making it through the pass. Most had been forced to turn back.

Nevertheless, we were determined to try our luck. The next day, we ascended to “High Camp” - 3 miles above sea level, where we would spend the night. After a steep climb in an extremely thin atmosphere, we were greeted by a 6-foot blanket of snow at the camp.

During the night, the temperature inside our unheated rooms plummeted to 14̊. Highly uncomfortable, but the night was a short one. At 4 am, we had to start our preparations for the ascent to the pass. We put on our long johns, winter trousers and down jackets. Legwraps and crampons used for the first time.

It was dark, snowing, and extremely windy as we set out. After covering only a few hundred meters, we heard someone cry out and saw a person fall down a steep rocky slope ahead. He landed less than 300 feet below us.

We found out later that a guide had lost his grip while trying to bring an animal under control. A yak being used to transport equipment had panicked. We were standing on a narrow pathway on the snow-covered slope, glad of the certain degree of stability provided by our crampons and sticks, but after seeing him fall my confidence that I would make it over the pass with the whole group was draining by the second.

Fortunately, other guides were able to save their fallen colleague. In another great stroke of luck, the man who had fallen had not sustained any serious injury. I was thankful, but not reassured.

Slowly but surely, we continued our climb aided by the light of our head lamps. We soon reached the 3-mile mark. At this altitude, air pressure has approximately halved. Each breath provided only fifty percent of the normal oxygen supply. The warmth of sunlight sounded heavenly. On the final few feet of the climb, the sun's rays graciously bathed the snowy landscape in a fantastic light. Suddenly, unexpectedly, we had made it. We had reached the summit of the windy Thorong La Pass at 3.3 miles above sea level!

The Mustang region of the Himalayas stretched out on either side of us, dry from being in the rain-shadow of nearby mountains. A spectacular view. The snowy descent to Muktinath would prove to be another challenge, but we were euphoric at having overcome the toughest day of the tour so successfully.

After descending again, a bus took us to the hot springs of Tatopani, where we spent some time relaxing. We passed through endless woods of rhododendrons, made one last ascent up Poon Hill, and finally traveled by jeep to Pokhara.

I had covered a distance of around 112 miles on foot and achieved an elevation gain of 6 miles. Thanks to the quality of my equipment, I had suffered no blisters or pressure points on my feet.

It had been a fascinating experience, and not just because of the natural surroundings. Even while enjoying the spectacular views, I was impressed by the tireless efforts, friendliness and strong sense of responsibility from our guide and the porters.

Two weeks of exhausting adventure only left me with an unquenchable desire for more. I'm sure it won't be long before I embark on my next trip to Nepal.