The Heat is On at the FireFit Canadian and World Championship 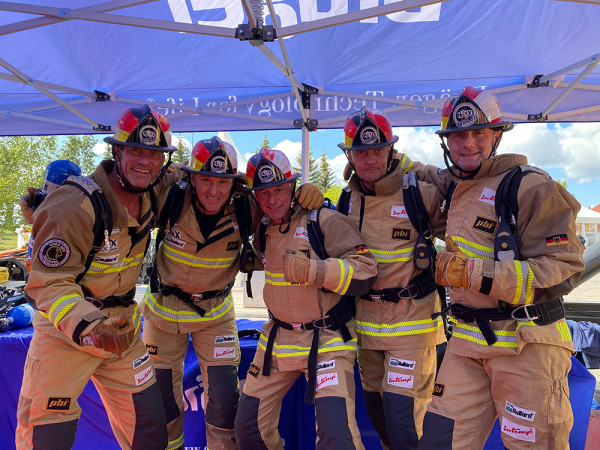 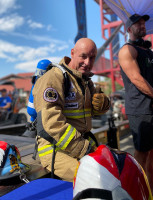 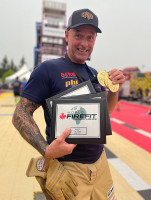 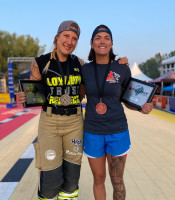 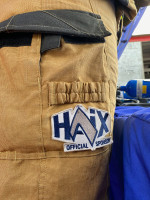 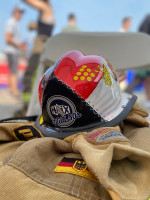 12 German athletes, 12 pairs of HAIX boots and several bags filled with competition clothing made their way to Calgary in Canada at the beginning of September to take part in the FireFit World Championships there. In Spruce Meadows, the largest equestrian facility in the world, the red and yellow competition arena, including a 12 meter high tower, was set up and was centrally located, surrounded by the various equestrian arenas. In addition to the athletes, international guests were able to get a feel for the firefighting sport and watch the competitions from the edge of the course.

Wednesday, September 7th, was first competition day for the German athletes and, among them, seven athletes from "Team HAIX". The entire team was warmly welcomed in the registration tent by Hillary, the "Mother of FireFit". Most of the twelve German athletes belong to the "FireFit Europe" team and have been organizing and taking this competition to various European countries since 2021. So, for many on he team, this was their first meeting with the Canadian organizer.

After checking in at the registration tent and filling out all the necessary forms, the first step was to visit the parkour. What is different from Europe? What is the best way to run here? What is the fastest way up the tower? The Canadians were not afraid to approach the team and give them tips. Especially Brad Dicks, who later became world champion. He personally went through the different stations with two German athletes and showed them a few tricks - without any prompting, simply out of helpfulness. But not only Brad was helpful and hospitable, all the other Canadians were very open and even offered the use of their tents, so that the German team had a place to store their bags and a place to rest between the runs. The hospitality was enormous and one felt very welcome. So, with all their gear stored, they were ready to go.

Opening ceremony was a special feature of FireFit in Canada! Before the first runs could take place, the athletes were first called to the parkour. After the "Firefighter's Prayer", a very touching prayer honoring and remembering comrades who died (especially in service), the Canadian national anthem was played.

Excerpt from the prayer:

"When I am called to duty, God, whenever flames may rage; Give me the strength to save some life, whatever be its age. Or save an older person from the horror of that fate. Enable me to be alert and hear the weakest shout, and quickly and efficiently to put the fire out." - A.W. Smokey Linn

In addition, with the death of Elizabeth II having taken place this same week, the British national anthem was also played and the Canadian and British flags were flown at half-mast. For everyone, but especially for the athletes from the United Kingdom, this was a very moving moment.

Equipped with the new HAIX Fire Eagle 2.0, the HAIX team went to the start in the qualifying runs. "GO!" was the word from the referee, the flags in front of the first steps of the tower were raised and competitors ran up with the 19 kilo hose package. Once at the top, the "Donut Roll", also weighing 19 kilos, was hoisted up and deposited in the box. Now with quick feet down the tower it was on to the "Force Machine" and where participants drive the weight backwards. Then: slalom, hose pull and on to the freestyle. Last up is the dummy drag, with the approx. 85 kilo heavy rescue dummy "Randy", which must be pulled over 30m backward to the finish line. Arriving there, one could finally take a deep breath, celebrate or be angry about the one or other "lost" second, check it off, and do better in the next individual run!

In the Tandem, which is called "Tech 2" in Canada, there was an additional technical challenge for the pairing. Here, after the Force Machine, a bottle must be removed from the carrier plate of the first runner then properly attached with retaining strap closed on the breathing apparatus, the second athlete could continue running with the bottle on his back. In the relay again, there was a lamp, which served quite classically as a baton. All athletes of the German delegation qualified for the finals and were allowed to compete again. The German team was also supported by HAIX West Canadian Sales Manager, Marianne Keras, who accompanied the team during the World Championships.

Even though there was complete focus and concentration before the runs, the fun was not neglected either. All competitors exchanged ideas, ate and laughed, tried out new techniques or looked at and admired each other's equipment. The European and North American PPE (personal protective equipment) was very different. Although the minimum requirements for the gear are the same for both, the North American clothing is much larger, has more pockets and is more "bulky" in its overall appearance. In addition, their "boots", which resemble rubber boots and heavy helmets. The German equipment is lighter, sportier and more conspicuous in color. But one thing unites both equipment: the fires burn the same all over the world. And both have to meet the demands of a firefighting mission.

The German team made for a uniform appearance in its individual, tandem and relay races as they were all wearing the new HAIX Fire Eagle 2.0. The firefighting boots with the neon yellow protective toe cap generated a lot of curiosity among the other competitors and often competitors came to the German tent to have a close look at the boots or even to try them on. And as if it was possible to run even faster with them, the German team really stepped on the gas again at the finals Saturday and Sunday! Several medals were collected and the German competitors dominated on the podium. The successes were celebrated in the evening in the "Greta Bar" with all competitors. At the After Show Party, the week could be reviewed over a drink, either talking about the runs or simply enjoying the last evening together.