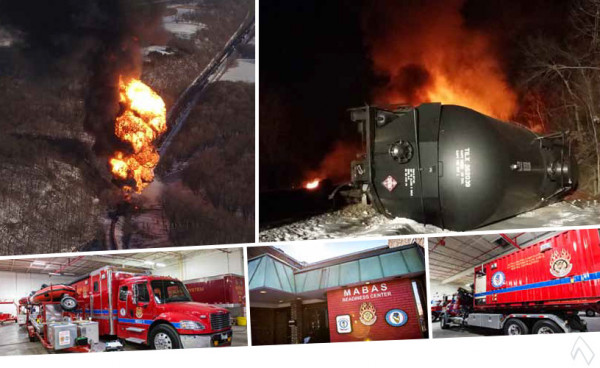 MABAS is an organization that jumps into action in the event of a major incident where the local fire department would be unable to cope on its own. The Mutual Aid Box Alarm System coordinates the response to large fires, train accidents, hazardous material incidents, airplane crashes, earthquakes and other emergencies with large numbers of causalities, providing intelligent and effective standardized rescue methods. It can mobilize 38,000 of the 40,000 firefighters in Illinois, and also assists fire departments in Iowa, Indiana and Wisconsin, while also providing equipment. The system is funded by its member organizations and no one is charged for its services. MABAS Plans Chief Tom Lovejoy gave us a first-hand look at their facility.

HAIX® traveled through the suburbs of Chicago and up north to Wheeling, the home of MABAS Division 1. Upon arrival, Plans Chief Tom Lovejoy offered to give us a tour through the huge fleet park. Chief Lovejoy has years of experience in firefighting and rescue operations. He began his career as a firefighter/paramedic in 1980 at Skokie Fire Department. In 2003, he was hired as captain/shift commander by Highwood Fire Department, where he quickly become chief. By 2006 he worked as incident commander at IL-IMT, before becoming Plans Chief at MABAS several years ago. As we traveled the facility, there were trucks of all sizes, loaded with tons of equipment along with special trailers with back-up material, including 500 ladder trucks, 1,300 ambulances (many paramedic capable), 250 heavy rescue squads, and 1,000 water tenders. Fire/EMS reserve units account for more than 1,000 additional emergency vehicles. These are the vehicles that a single fire station could never afford. There are also double-decker boat trailers, gigantic fans and mobile post commands with operating theaters.

In 1970, the MABAS box alarm system was established to provide a swift, standardized and effective method of mutual aid assistance for extra alarm fires and mass casualty incidents. Today, the organization includes nearly every fire department in Illinois, as well as many areas of Iowa, Indiana and Wisconsin. Today MABAS-IL includes approximately 1,000 of the states’ 1,200 fire departments organized within 67 divisions. MABAS-IL divisions geographically span an area from Lake Michigan to the Iowa border and south almost into Kentucky. Twelve Wisconsin divisions also share MABAS with their Illinois counterparts. The cities of Chicago, St. Louis, and Milwaukee are also member agencies. “We were even called out to assist the local crews after hurricane Katrina,” says Chief Lovejoy, by assisting firefighters in New York, which is well outside the actual MABAS area. “We can coordinate efforts and provide assistance that is well outside the scope of a normal rescue operation.”

The team from MABAS Division 1 was under extreme pressure during our visit because a cargo train carrying highly flammable goods derailed about 3.5 hours away from Chicago, in Galena. Three railcars had already exploded. Helicopters were already at the scene, scouting the terrain in a very remote area. There was a high risk that another ten boxcars might explode, which would result in an environmental catastrophe. This is a situation that cannot be handled by any fire department on its own, and MABAS was established exactly to deal with such incidents. “I hope you got a good impression of what MABAS does, and if you ever need anything. Just give us a call!”

We are in no doubt that he actually means it! Browse HAIX firefighter work boots today.