The power of women when seconds count 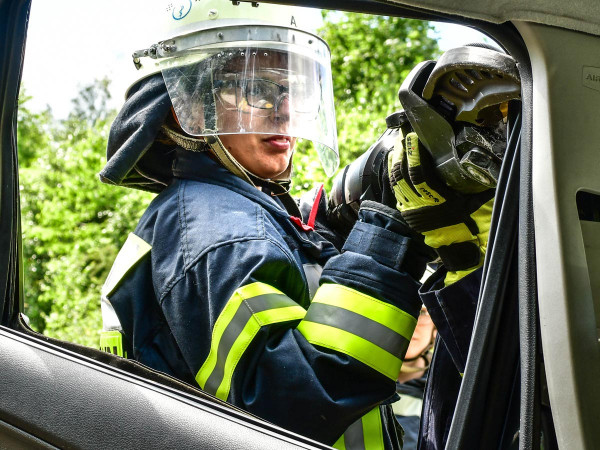 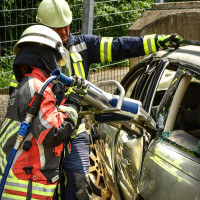 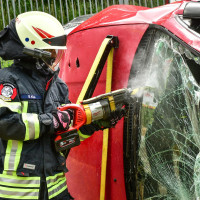 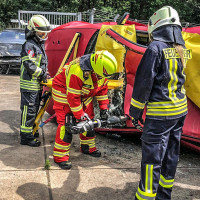 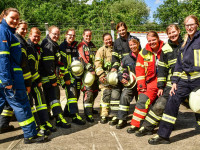 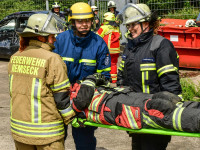 The Title "Intensive Training" Says it all

Lara summed up what went through her head before the start of this intensive training, “At the beginning I was skeptical - a training with only women? Can that go well? Not because I thought that we couldn't do it technically or in terms of strength, but because the idea of ​​only working with women was actually new to me. But the skepticism vanished immediately upon arrival. 12 women, of different characters, different backgrounds and yet all had a common denominator - the willingness to help whether at the Federal Agency for Technical Relief or for the fire department."

The rescue training got underway with a theory session to make sure everyone was up to speed with the required knowledge. There is, for example, a certain series of questions that needs to be posed at accident sites in order to identify whether vehicles involved may have alternative drive systems. Is there any leaking fuel? What does the underbody of the vehicle look like? Does it have a tank cap? Can anything be learned from the surface design of the car?

The trainers then go on to explain why every minute counts when rescuing people who are trapped in a vehicle after an accident and all the variables that are possible. The idea of getting victims out by taking the roof off a car or of making a large hole in the side is a familiar scenario, but most do not know about the “fish can” technique.  This is where the roof and trunk of the car are cut with the rescue saw and spreader so the roof can only be folded forward to free the person quickly and gently.

Training continues in the afternoon, as participants were taken to a special “rescue training playground” to practice this technique. There is no shortage of accident vehicles that need to be dismantled, both hydraulic and battery operated. The work is done in two groups. One group begins with a side opening on a compact car. This is a chance for the women to try their hand at the "fish can.” After preparations are complete, one two, three – with all their might, the six women manage to fold down the roof at the end.

The second group consists of six group leaders. Each of them takes a turn in command, thinks about the best procedure to use given the situation, the individual steps needed, and assigns her colleagues a job. Their mission is to extricate a passenger from a car that had flipped onto the driver's side. After the vehicle has been secured from tipping over, the female firefighters go to work. They saw out the windshield and roof so that the victim can be lifted sideways out of the vehicle using a transfer board. The crew moves onto another vehicle which has a large side opening. The women push the roof away with the help of rescue rams and the car becomes half a convertible.

Jennifer, one of the section leaders, raves, “A really great experience!  Of course, you never stop learning - even if it's just little things. It is also nice when you can show others something and everyone benefits from the knowledge. I am also very amazed at how friendships developed among the participants. That may have been the best part of the experience!”

As the rescue training drew to a close, the instructors were also delighted with the amount of professionalism on display, saying having a training group made up entirely of women created a different mood with more laughter and a natural team spirit. The group also came up with some different approaches to the tasks at hand. Obviously, it is hard for one woman alone to operate the heavy spreader and cutting equipment. But a colleague would often step in to lend a hand.

The final lesson was clear. We can do anything if we pull together! “There was certainly enough fun and laughter,” says Lara. “This was a fantastic group, and we have shown that women can get things done.” All the other “girls of HAIX” were full of enthusiasm about the day - an unbelievably great weekend.”