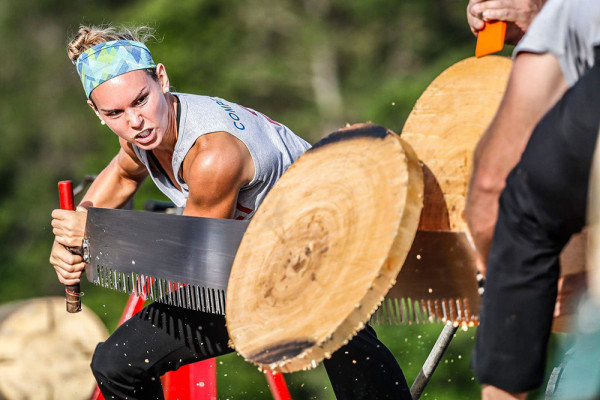 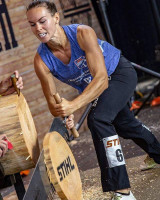 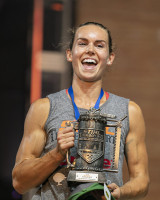 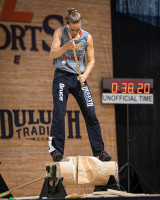 When most people think of loggers, they envision a burly man swinging an axe to chop wood, but one woman is changing what it means to be a lumberjack athlete. Martha King doesn’t resemble the stereotypical bearded man in flannel, but her skills with axes and saws have brought her to the top of the lumberjack sports world.

King says she blames her dad for her career in lumberjack sports. She was raised amongst trees, watching her dad maintain them. Not only did she watch her dad care for trees, she also heard stories and saw photos of his time as a member of the woodsman’s team at Penn State University. King said she idolized her dad for his involvement on the team, so when she decided to attend Penn State, she explored the team for herself.  “I picked up an axe when I was eighteen at Penn State and joined the team and it was just one of those moments that felt like I had found what I was meant to do,” said King. “I felt like I just really found my place when I started swinging an axe and competing on the team.”

She was hooked - the sport became a permanent part of her life. Since graduating from Penn State in 2011, King continued to compete in lumberjack sports. She says she competes in around 25 to 30 competitions per year, traveling across the United States and abroad. “Starting out at Penn State, I had no idea there was a professional realm for women at all,” said King. “I just thought, hey, this is really cool, this will keep me fit and help me blow off some steam after class. Here I am, many years later, having been around the world. The people that I’ve met, the friends I’ve made, the things I’ve learned – it’s all been so enriching.”

One of these competitions that took King overseas was the inaugural Timbersports Women’s International Cup in Vienna, Austria, in May 2022, where King took home first place. King says while she typically competes against women, this all-female competition is special. “You know the women who are competing are there because either they are the best from their country, or they qualified out of their region. You really have to bring it, so it’s a fair bit of pressure,” said King. “It’s an honor to be competing amongst women who are so passionate and work so hard, because there are women who came before us who aren’t necessarily competing anymore, but we’re reaping the benefits of their hard work.”

King says when lumberjack sports began, women were only allowed to saw in competitions, but after working hard and proving themselves, were able to chop and compete in other events. King says current competitions reflect the hard work of the women before her, and she wants to keep the trajectory going.  “I really think the sky’s the limit,” says King. “If we can help everybody work together, I think the sport will really succeed.”

King says she’d like to give back to those entering the sport as lumberjack sports continues to grow and says anyone who’s interested has her support as best as she can give it. Her advice to rookies in lumberjack sports is to start with safety by investing in good gear. This includes sharp axes, saws, and footwear. As a lumberjill and arborist, King is currently wearing the HAIX Protector Ultra Lime Green, which provides maximum protection for loggers and other people who make a living using chainsaws.  “I freaking love HAIX boots,” says King. “I’m normally putting like eight miles per day on my boots [as an arborist,] and other brands would wear out so fast, but HAIX are super comfortable and hardworking. My HAIX Protector Ultras have proven to be incredibly capable and comfortable, they are super robust boots with great safety features so I can cut with confidence all day long.”