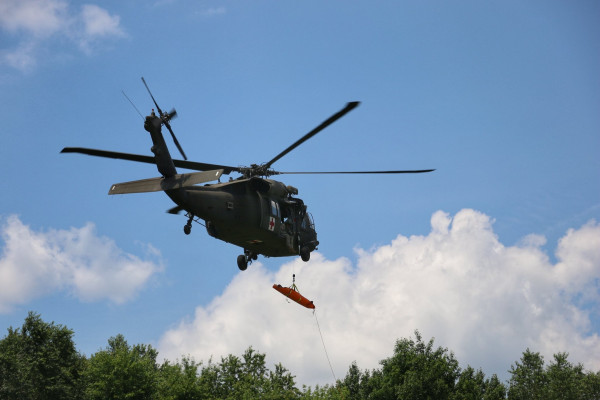 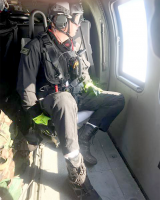 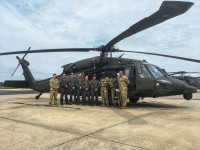 PA-HART (Pennsylvania Helicopter Aquatic Rescue Team) is a joint partnership between the Pennsylvania Army National Guard, the Pennsylvania Fish and Boat Commission, and the Pennsylvania Emergency Management Agency (PEMA), along with civilian rescue technicians or civilian trained swift water rescue specialists. This highly specialized aerial search and rescue team provides an air asset for the Commonwealth of Pennsylvania and the United States as a whole. The team is assigned missions, at a state level, through the Pennsylvania Emergency Management Agency. They use unique rescue hoisting capabilities with the use of a UH-60 Black Hawk helicopter to provide life-saving search and rescue missions. Scott Grahn is a Senior Strike Team leader for PA-HART and has been involved with the team since its inception in 2007. HAIX® sat down with Scott to talk about his experiences.

PA-HART is a team of 24 volunteers and is the primary hoisting team for life-saving missions. For instance, if a person is trapped in a car during a flood and the Swiftwater Rescue team can't get to them, HART would be activated. They handle anything from Lock and Dam incidents to high rise incidents.

During a normal day, Grahn volunteers with the Pennsylvania Fish & Boat Commission Swiftwater Rescue and also with PA-HART part time doing specialized rescue operations for the state. “We have incidents where hunters go out into the wilderness and fall out of tree stands, and it could take two or three hours for EMS to hike back into the woods to get to them and carry them out.” Grahn says. In that case, HART would be activated and would go to a designated airport location to get picked up by the military. A lot of HART missions happen during flooding season, which runs from Spring until early Summer, then again during Hurricane season in the Fall.

A lot of it his volunteer work is within the Commonwealth of Pennsylvania, but there are times when they go on deployments out of state. Sometimes they fly up and down the coast of South Carolina if there has been a hurricane, so they can help with rescue operations.

The second-leading cause of weather-related deaths is flooding. The weather service is always trying to instill into people a sense of caution when they see flooded roadways. "Turn around, Don't Drown" is the motto to remember. It only takes one foot of water to stall out a vehicle and drag it away, and half that depth for a person on foot.  With all the hidden debris, and how fast water can move, time is of the essence. HART was also put together to protect Swiftwater Rescue teams. If the Swiftwater Rescue team goes into a flooded area and they somehow get into trouble, HART is able to get them out to safety.

"I've been involved in the water rescue programs for a long time, and I've seen the good, the bad, and the ugly. One thing you have to remember about the floods, sadly, is that you can't always save everyone. There's going to be times when you get out to a vehicle in the middle of a flood and remove two people and try to get the third, but the rescue boat is already filled up. By the time you drop off the first people and get back, the entire car is already gone. I've saved many people over my years of service, but I've lost people, too.” To help cope deal with the unfortunate times, he tries to focus on the people HART has made a difference for. It takes a special person to deal with that, just like a Firefighter, EMT or Police Officer.

It's also very important to have the right equipment during missions, and that's one of the reasons why some PA HART team members prefer the HAIX® Black Eagle Athletic 2.0 T High Side Zip. One feature on this boot is the ankle protector, which not only offers ankle support and protection from impacts, it also offers optimal traction when on angled surfaces like roofs, even when wet and slippery. When the rotor blades from a hovering helicopter are blowing winds 90 to 100 miles an hour while trying to put someone in a harness and a strop, superior grip and stability is a must. Same thing with boat operations and ice rescue, their feet must be protected. That’s why the Black Eagle Athletic 2.0 T High Side Zip Tactical Boot is such a good fit, because it is lightweight and breathable with fast drying qualities when exposed to water. And the built in side zipper makes it easy to get on and off quickly, even when wet. It is slip resistant and non-marking on boats as well as easy to clean no matter what is encountered on the job.

Not only does the equipment HART uses have to be up to the task, but the training has to be top-notch as well. Physical fitness is very important. In the severe water rescue field, and especially being a HART technician, you have to be able to stand a head above everyone else. This line of work is incredibly dangerous because of the power and unpredictability of mother nature, so you have to have a dedication to this kind of work.

“The best part about being a member of PA-HART is that you actually save people's lives. We're called on and put in harm's way.  The training, the working around water and wilderness, just being part of a team that knows one day we'll be called upon. That's when lives are saved. What we do, it makes a difference. It's worth it,” Grahn concludes.