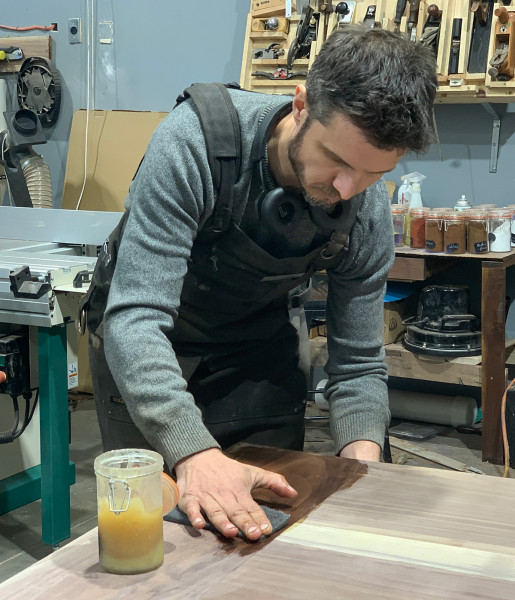 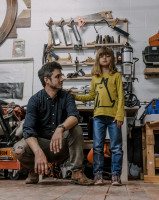 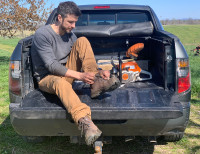 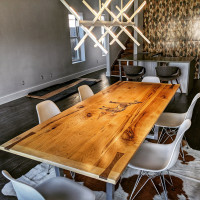 One thing that can be said about Woodworker, Will Ney, is that he does take the road less traveled. He is “carving” a name for himself one table at a time. Born and raised in Kentucky as Will says, “in a small town between two other small towns”, Will never even used a hammer until he was 30. Having graduated from Transylvania University with a philosophy and political science degree his first career was a librarian. He kind of tumbled upon woodworking when he decided to build a doghouse for his new dog. After much trial and error, he ended up discovering a love of working with his hands. A new hobby was born which eventually developed into a full-blown career.

Self-taught in the art of wood crafting, Will initially milled all his own lumber off the family farm which has been in the family since the 1780’s. He would cut down failing trees with a chainsaw and use small lathes to mill it on the farm, by hand. As Will says, “I still do that oftentimes, because I’m literally farm to table.” All the wood he uses in his work is locally sourced. “The variety of wood and the quality of wood that can be acquired in Kentucky is amazing”, says Will. What he does is all done in house, and he builds in a way that is timeless while at the same time making sure it is relevant. When choosing wood for a particular piece, he can be very particular. Since the choice of wood is the main element of the piece, he wants to choose only the highest-grade materials that will reflect the timelessness of the piece. His pieces are built to last and are built of only of hard woods with predominantly all wood joinery.

He is now commissioned to build tables, built to order, with each table unique to its new owner. Every table can take 50-60 hours to complete. And while he started out building tables more for commercial use, he has recently started taking on more and more private and residential commissions. He can count among his list of customers Buffalo Trace distillery, the makers of some of the most famous bourbons in the world; Elon Musk the owner of Tesla; and even a Hollywood movie studio. He has built tables from coast to coast.

Will Ney is building something that is going to last for hopefully many generations. Custom furniture to keep and pass on to future generations rather than furniture made to just throw away. As Will stressed, “People do recognize quality. The quality of a human being, the quality of the work, the quality of the tools that are used – the quality of everything involved.” For someone who went to college thinking he would become a lawyer, Will Ney has found a passion he loves and is building beauty in the world one piece at a time.  For more on Will Ney and his creations, visit his website at Neymade.com.