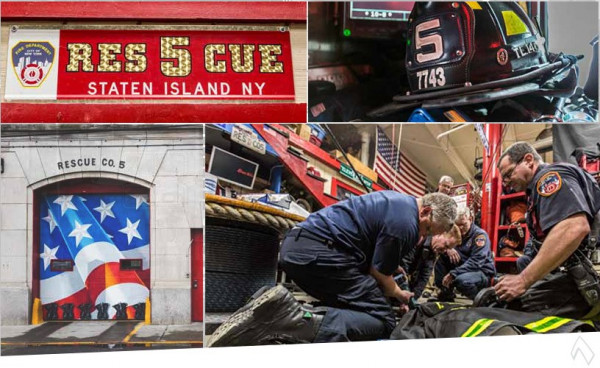 Our four-part series on FDNY continues as we take an in-depth look at some of the unique divisions of the world’s most famous Fire Department. In part one, we focused on the legendary team from Rescue 1 in Manhattan, which responded to the 9/11 attacks. For part two, HAIX® got up close and personal with the team at Rescue 5 on Staten Island.

The angle grinder cuts slowly through the steel. Firefighters do everything they can to rescue a child caught under a piece of steel scaffolding using a Diamond Flex blade. They are also trying to keep the child calm and reassured, while the crushed limbs are carefully examined. After about twenty minutes, they are finally able to free the child’s arm. This was a horribly difficult job, as there is always the risk that the victim might be injured even further during a rescue operation. Fortunately, on this day they were only dealing with a dummy in a training session at Rescue 5.

The fire rescue companies (one for each of the five boroughs) are under the Special Operations Command. The companies were initially set up to rescue firefighters that ran into difficulties during their work. Over time, the rescue companies developed into highly specialized units. Captain Jim Murray is responsible for the Special Operations Unit for Staten Island and South Brooklyn. This is a huge area made up of residential areas, industrial estates, bridges and water. Therefore, the station is equipped for all types of accidents and emergencies, including four rescue boats outside the building that can be deployed at the drop of a hat. “We are, of course, also on duty if there is a hurricane or similar weather emergency,” explains Captain Murray.

Whenever they have the time – which is rare – the firefighters engage in training at the station. They know that to be able to help, they need to be well prepared. And they are definitely quick when it’s time to jump into action! Boots up, jacket on and off they go. Eighteen seconds after the first alert, the fire truck flies out the gate, sirens wailing and lights flashing as they head to the scene of a two-vehicle crash, where one passenger is trapped. All this information comes in on the monitor from the operations center. On certain days, they respond to calls nearly every single hour. Shortly before arriving on scene, a “10-8” flashes over the monitor and there is a sigh of relief among the firefighters. Upon arrival, they learn that the passenger had already been freed from the car by some good Samaritans and is now in the safe hands of emergency personnel. The truck with the prominent number 5 on its grille returns to the station, ready for the next call.