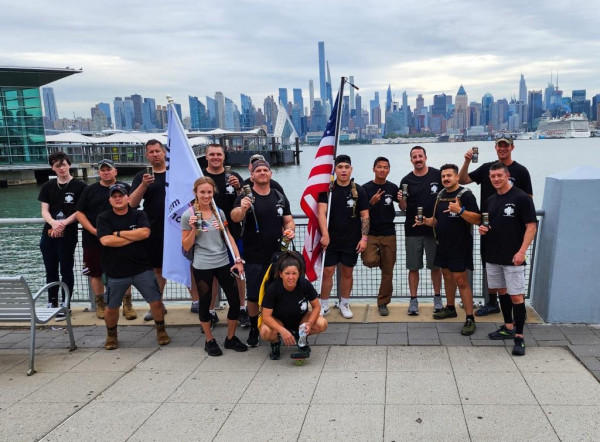 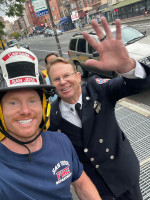 Every year, the anniversary of the September 11th terrorist attacks serves as a point to remember those whom we have lost. Over 3,000 people died that day; 441 of those deaths were first responders who ran into fire and smoke as the building crumbled in order to save others. In the two decades since the attack, nearly 4,000 more first responders have lost their battle with cancer and other illnesses stemming from Ground Zero. Every year, Americans gather to honor the brave men and women who gave their lives to save others and to raise money for ongoing healthcare for our first responders. This year, John Leetch and Steve Huseman are continuing a tradition of marching nearly one hundred miles with an American flag to present at the National 9/11 Memorial and Museum in New York City. The flag is then flown over the memorial on September 12. “For me, marching is a way to raise awareness for our first responders.

There are many people that join the military or first responder professions that are doing it because they genuinely care about other people, because for them, it isn’t a sacrifice,” Steve explained. “The march, for me, is a small way to say hey, thank you for what you do day in and day out. A one-hundred-mile walk is nothing compared to the sacrifices and the danger they put themselves in every day.”

Steve’s father is a retired firefighter who served in San Jose, California for thirty years. His father’s work gave him an up-close look at the struggles firefighters face. He felt more attention needed to be brought to the issues firefighters face, because first responders have already given so much. “I’ve always wanted to do something to honor [9/11 first responders], to honor my dad, and to bring awareness to these changes that were being made,” said Steve. That’s when he reached out to John, who he had been friends with since high school. John is an Air Force veteran who has been involved with the march since 2014. John started marching to Ground Zero each year while he was stationed at McGuire Air Force Base, and eventually got involved in the overall planning of the march the 100 for 911.

One of the first ideas Steve shared with John was that he wanted to do the march in full turnout gear. While wearing the gear is an added challenge for Steve, who isn’t a firefighter, he says it’s an important element in bringing attention to the cause. “I thought for the cause that I’m wanting to bring attention to, doing it in full turnout gear would hopefully get people asking more questions, like ‘why is he wearing that?” The San Jose Fire Department in California donated the turnout gear, and HAIX donated the boots.

The walk started in 2013 when a group of active-duty Airmen at McGuire AFB in southern New Jersey wanted to do something in remembrance of September 11. In the beginning, a team would split the length of the trip, but now, individuals do the entire length themselves. Although each person does the whole distance themselves, they aren’t alone over the course of the journey. The group walks together, and people gather in the streets of each town as the group passes through to join in memorializing 9/11 and cheer the marchers on. “We’ve never seen this before. We continue to get out and grow over the years and every city that you would walk by, they would pretty much hand over a police and fire escort while we’re walking through whatever town that is. There’s this whole line of fire trucks and cars that are shutting down temporarily the intersections that we’re walking through, and pretty much getting traffic to stay away from the group that’s walking,” John explained. “I’ve never seen that, and we didn’t ask for it. That was just something that naturally happened. When you see something like that, no matter how tired you are, you sort of get a second wind.”

To John, the march is even more special because it brings people together at a time when the nation is very divided. The marchers are hoping increased awareness will inspire more people to donate. Each year, they ask people to donate through a special link at 100for911.com. The money raised each year is given to different charities that benefit first responders or the armed forces; this year, money is being donated to the Gary Sinise Foundation. Around $15,000 was raised last year and the marchers are hoping to exceed $20,000 this year.

The march started on September 10th at McGuire AFB and finished at the 911 memorial the afternoon of September 11th It takes around thirty hours for the marchers to travel one hundred miles. The marchers documented their trip all long the way on their Facebook and Instagram.