World Champion on an Emotional Rollercoaster 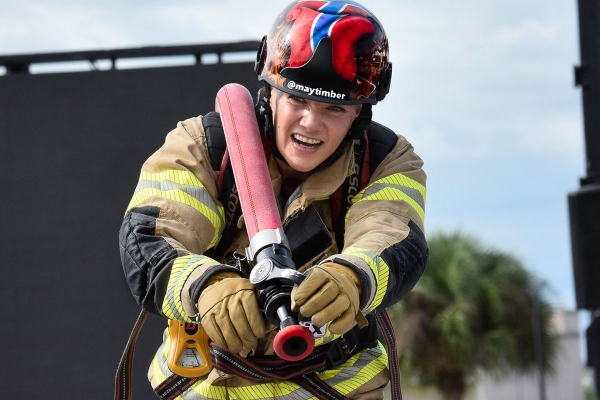 Pounding heartbeat. The tension is at its peak. Then the starting signal sounds. The spectators at the Firefighter Combat Challenge World Championships in Florida cheer on May Tømmervold. After 2:25.09 minutes, total exhaustion mixed with pure joy follows at the finish: with this performance, Tømmervold becomes world champion.

Not only has she mastered the FCC course but preparation prior to this run that was anything but perfect. Closed gyms and strict entry regulations prevented her from taking part in competitions in Europe for a long time. For the ambitious firefighter, this was no reason to stop training. May takes things into her own hands: "At the fire station, I imitated the course as well as I could, and at the same time I was able to split up the different stations better. This allowed me to polish my technique and work out new methods to tackle the various tasks even better. I feel like I'm discovering more little ‘hacks’ with each season." In training, she is largely on her own. The professional firefighter studies the training sessions of her fellow competitors and gets tips and feedback on how to improve via social networks.

Was all this effort for nothing? 14 days before the long-awaited event, May's doctor advises her not to take part. During training, the dummy Rescue Randy and his 80 kilograms of combat weight had fallen on her foot. "I could no longer walk properly and running was extremely painful," May describes. On top of that, there was a long break from competing to contend with because of covid. "I was a bit anxious to see how I would perform out on the course, both physically and technically." But the decision to participate was made; after having already been forced to only watch from home the year before, for May, not competing for the title was not an option.

At the World Championships that took place in Florida, May is almost a lone fighter as a European. Hardly any other foreign athletes received visas for the trip. Above all, the Norwegian misses her FirefightHers women's team. The female firefighting athletes have become friends in Europe and support each other. Together, May is sure, the European firefighter girls would have had the best chance of winning the female relay.

This year, she is getting support from Sean Sullivan. The American asked the Norwegian to be her tandem partner. Together they formed an "over 40+ Co-Ed Tandem" and set the world record as the first duo in this category. And this despite the fact that Sean's preparation was not without injury: Just one week before the Worlds, he injured his calf muscle. In retrospect, May can laugh about both of them doing the tandem relay with an injury: "Two half-broken 'oldies' limping our way through the course - the picture was certainly hilarious."

On the road to success

In the end, the trip to Florida was rewarded: May secured a total of four world championship titles. In addition to the trophies in the women's individual, women's individual over 40 and the Co-Ed tandem, she also set the best time in the women's tandem and a second place in the women's relay. Nevertheless, she always feels awkward on the podium: "I never enjoy being the center of attention. But of course, I'm super proud of myself for achieving one of my biggest goals." Back home in Norway, the interest in her personally, and the sport itself, is huge. "Interviews for TV, newspapers and radio, talks at conferences - the response is really overwhelming. This gives me the opportunity not only to present my sport, but also to draw attention to the issue of diversity in the fire service."

Despite all the success, the palpitations and excitement before every start remain. How does May deal with her nervousness before the competition? "Can I say: Not at all?! I’m pretty good at hiding it and not freaking out publicly, but inside I just feel terrible. My whole body is trembling and my stomach is doing hula-hoops." One exception was the start before the individual final in Florida: "Maybe it was because the weather changed on that Friday morning, from sunny 30 degrees to rain showers and temperatures around 14 degrees - so more like a normal summer day in Norway. Just like I'm used to." As soon as the start signal sounds, May takes control of her head and body again. She blocks out the loudspeakers, comments from the announcer, and shouts from the spectators during her run. She only listens to her own voice telling her "GO, GO, GO, GO!"